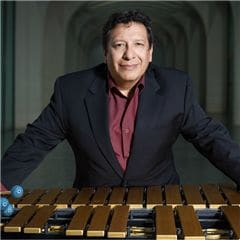 Considered by critics around the world to be one of today's finest Latin jazz artists, Mexican-born vibraphonist and composer Victor Mendoza's career includes performances with his own group and as guest soloist around the globe. Recent presentations include guest appearances with the World Festival Orchestra under the direction of Paquito D'Rivera, the Milan Svoboda Orchestra in Prague, sold-out shows at Queen Elizabeth Hall in London and in Tel Aviv, and as soloist with the Carlos Chávez Symphony Orchestra in Mexico City.

Recent presentations include a solo appearance with the 85-piece Banda del Puerto in Valencia, Spain, under the direction of award-winning conductor Isidro Coll Ballesteros, as well as an upcoming guest appearance with the Granada Symphony in Spain.

Previous recordings and performances with his own group, as well as with artists such as Paquito D'Rivera, Claudio Roditi and Giovanni Hidalgo have earned him the respect of critics and jazz fans around the globe. "This is Why," one of Victor's previous recordings, led Latin Beat Magazine to name him one of the Outstanding Latin Jazz Artists of the Year. Victor's recording "Black Bean Blues" was named one of the best Latin jazz recordings of the year by Modern Drummer Magazine and led Jazziz Magazine to dub him "the genre's leading vibraphone practitioner" and "one of today's most resourceful composers."

As a Professor at the Berklee College of Music and as clinician for Yamaha and Vic Firth, Victor has earned an international reputation as a jazz educator, regularly conducting master classes at major music schools, universities and music conferences around the world.