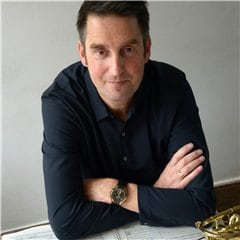 Having studied the trumpet at the Amsterdam University of the Arts (Conservatorium van Amsterdam) with Peter Masseurs and conducting with Danny Oosterman, Erik started his career as a freelance trumpet player Erik has performed with the Dutch Philharmonic Symphony Orchestra, Royal Ballet Orchestra, Amsterdam Wind Orchestra, National Youth Orchestra to name but a few.

Over the years Erik has conducted a variety of ensembles from symphony orchestras to wind bands and has given master classes at the Amsterdam University of the Arts and the Hanze Prince Claus Conservatoire, Groningen.

An accomplished brass band conductor, Erik has conducted 5 times at the European Brass Band Championships winning the own choice performance section with Brassband Schoonhoven in 2012 with 99 points, the highest ever achieved. Eric also enjoyed a number of other successes as conductor of Brassband Schoonhoven and between 2010 and 2013 achieved the unique feat of winning all the contests in the Netherlands and Belgium.

During his career Erik’s musical talent has taken him all over the world and has meant that he has performed at some of the most prestigious venues such as the Royal Albert Hall in London. In May, Erik has been invited to conduct the European Youth Brass Band in Lille, France.